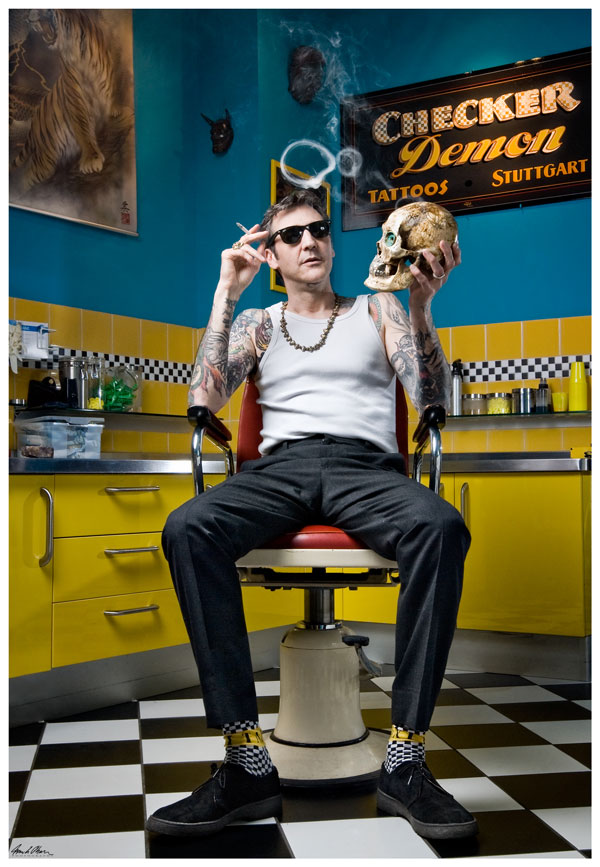 Luke Atkinson is the owner of Checker Demon Tattoos. Luke has travelled the world extensively to live and learn about the many secrets the tattoo world has to offer.

After an apprenticeship with Dieter and Anke Zalisz in Cologne in 1984, Luke set off on a 7 year journey which took him to England to work and study machine building with Micky Sharpz. An adventure in New York City working underground for 6 months, working with Shotsie Gorman, and visiting various Conventions. Finally heading to Japan in 1988 , a dream come true, Luke spent years working and studying with artists such as Horiyoshi III, Horitoshi I and a hand full of others.

Experiencing life in Japan was a major breakthrough in his tattoo life. In between working in Japan, various visits where made to San Francisco to spend time at the Diamond Club with Bill and Junii Salmon, the Picture Machine with Terry Tweed and the crew, Vancouver with the Dutchman and Paul jeffries at the Smiling Buddha in Calgary.

A summer was spent in Amsterdam with my godfather in tattooing, who did my first tattoo, Hanky Panky. Luke became good friends with Filip Leu and the Leu Family in 1986 and has been lucky enough to spend many a magic moment working together and learning throughout the years. In 1992 Luke was offered by, Barbara Schirmer, the opportunity to come and run Toby´s Tattoo studio in Stuttgart.

With a trial of 3 months to see how it went, Luke decided to stay and build up Checker Demon Tattoos as it is today. Attracting Worldclass Tattoo Artists for over 28 years, the studio has a reputation for itself of producing high energy work for an international clientel. Award winning work that has been published in many books and magazines around the world.

This website uses cookies to improve your experience while you navigate through the website. Out of these, the cookies that are categorized as necessary are stored on your browser as they are essential for the working of basic functionalities of the website. We also use third-party cookies that help us analyze and understand how you use this website. These cookies will be stored in your browser only with your consent. You also have the option to opt-out of these cookies. But opting out of some of these cookies may affect your browsing experience.
Necessary immer aktiv
Necessary cookies are absolutely essential for the website to function properly. This category only includes cookies that ensures basic functionalities and security features of the website. These cookies do not store any personal information.
Non-necessary
Any cookies that may not be particularly necessary for the website to function and is used specifically to collect user personal data via analytics, ads, other embedded contents are termed as non-necessary cookies. It is mandatory to procure user consent prior to running these cookies on your website.
SPEICHERN & AKZEPTIEREN